The “Law of Manu”

In researching my book on the Great Uighur Empire, I ran across the “Book of Manu” as a historical reference placing the Uighur people around the shores of the Caspian Sea in the 1931 Children of Mu (page 220.) Digging a little deeper, the Laws of Manu, also known as the Book of Manu, the Manava Dharma Sastra, or the Manusmriti, is an ancient book of the laws guiding social and religious life in 2nd and 3rd century BCE India.

In the 1926 Lost Continent of Mu Motherland of Men, James Churchward mentions the Manava Dharma Sastra and cites it three times (although he misspells it Dharma Lastra once.) Two mentions are almost direct quotations from Augustus LePlongeon’s 1896 Queen Moo and the Egyptian Sphinx (see Lifting the Veil on the Lost Continent of My Motherland of Men [Appendix 2 page 20].) The third mention is:

“Manava Dharma Sastra, a Hindu book, refers to the Serpent as the Creator.”

I actually found one occurrence of the word “serpent’ in one of the 2684 verses.

A twice-born man, who is unable to atone by gifts for the slaughter of a serpent and the other (creatures mentioned), shall perform for each of them, a Krikkhra (penance) in order to remove his guilt.
Chapter 11 Verse 140, (http://sacred-texts.com/hin/manu/manu11.htm)

Obviously, James did not reference this passage or the word “serpent” as his proof.

On the other hand, both the Manava Dharma Sastra and James do mention Narayana. James identifies Narayana as “The Seven Headed Serpent, the symbol of the Creator and Creation” and provides illustrations. 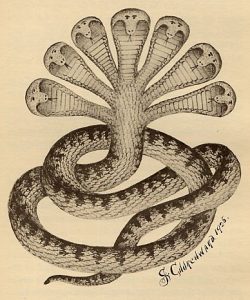 Narayana, The Seven Headed Serpent. The symbol of the Creator and Creation
Nara means the Divine One; Yana – creator of all things; Naacals – seven superlative intellects; Vendanta – seven mental planes

So to James, Narayana, his seven-headed serpent, was the creator and provides support for his statement that the Manava Dharma Sastra referred to the serpent as creator.

Examining the Buhler translation of the Manava Dharma Shastra, the following passage speaking of Narayana:

“The waters are called narah, (for) the waters are, indeed, the offspring of Nara; as they were his first residence (ayana), he thence is named Narayana.”
Chapter 1 Verse 10, (http://sacred-texts.com/hin/manu/manu01.htm)

Further investigation indicates Narayana is another name for Lord Vishnu, the absolute being in Hinduism.

If we are searching for the truth about James’ writings, we would need to acknowledge his errors such as the wrong translation of the name of Narayana, the replacement of Lord Vishnu with a seven-headed serpent, and that the Manava Dharma Sastra does not refer to the serpent as the creator.

Have a great day

I recently received an email from Tim Walsh of the Bruce Museum in Greenwich, Connecticut concerning some lantern slides being held in their collection. Apparently they are from a presentation on the Lost Continent of Mu, but whether or not they were used by James Churchward is unknown. 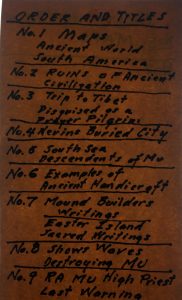 List of names for each section of the presentation
Courtesy of Bruce Museum, Greenwich, CT

Here are the slides in the third section entitled:

Trip to Tibet Disguised as a Prayer Pilgrim 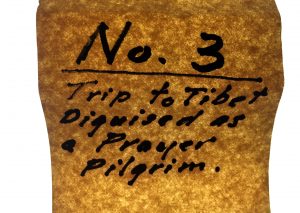 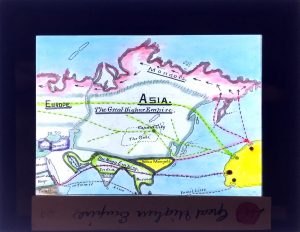 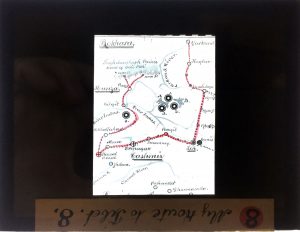 My Route to Tibet
Courtesy of Bruce Museum, Greenwich, CT 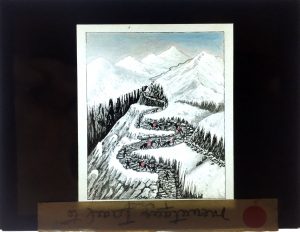 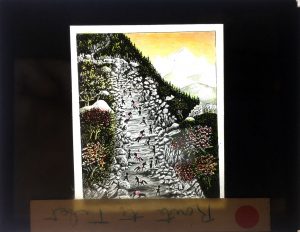 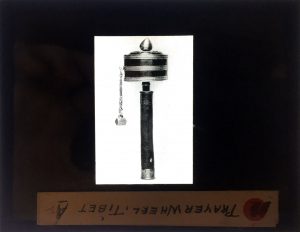 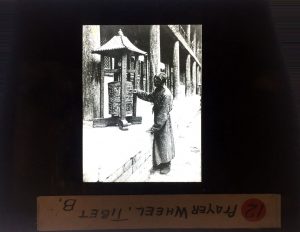 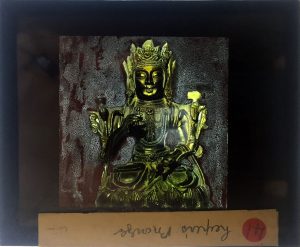 Where Are the Turks in The Lost Continent of Mu?

While researching information for my upcoming book on the Great Uighur Empire, I ran across an article entitled “The Ancient Uighur (Uygur) Empire” by Dr. Haluk Berkmen. According to the page information, it was last updated in April 2009.

The article begins: “The present work is an investigation into the forgotten past. Its goal is to bring into light the ancient civilization that existed many thousand years ago and which is not mentioned in any history book.”

In the fifth paragraph, he unveils where he believes where this cradle of civilization originated, Central Asia, according to ‘linguists worldwide.’ The next paragraph indicates his investigation for this ancient civilization starts in Asia and the proto-language (read Sun Language) spoken there.

The next portion identifies the ancient civilization as the Ancient Uygur Empire, the Empire of the Sun and tentatively dates it to 20,000 years BP. His source, James Churchwald, British military officer and author of books on the Lost Continent of Mu (at least he was consistent, all six mentions are misspelled the same way.) He even includes quotes and the map of the Great Uighur Empire from the Lost Continent of Mu Motherland of Men 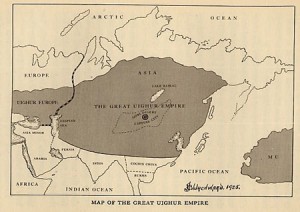 Map of the Great Uighur Empire

At one point, the narrative steers away from what James really wrote. Berkmen relates:

“Note that the Turks were also known under the name Mu. Therefore, the lost Mu Empire claimed by James Churchwald was another name given to the imperial nomads of Asia.”

The author’s intent becomes clear when he states:

How does this stack up to what James wrote?

Does the word ‘Turk’ appears in James’ works?
A search of all James’ published English-language works (excluding the 1927 Books of the Golden Age,) reveals no use of the word, Turk; however, there is one use of a word with those four letters in sequence, Turkestan, as shown below:

TIBET —Tibet lies in Central Asia. It is bounded on the east by China, on the north by Mongolia, on the south by India, and on the west by Kashmir and Turkestan. The Gobi Desert is a part of the northern boundary. Tibet was once a part of the great Uighur Empire. This was before the mountains were raised. The country then was flat and fertile. Now it is one of the highest plateaus in the world with masses of high mountain ranges, most of which run from a westerly to an easterly direction. In the south is the highest mountain range in the world—the Himalayas. Mount Everest, the world’s highest mountain, is in this range and lies within the boundaries of Tibet. Tibet has been called “the roof of the world.”
Children of Mu page 221

Does James refer to the Uighur Empire as the Empire of Mu?
In the 1926 Lost Continent of Mu Motherland of Men, James writes:

The Uighur was the principal colonial empire belonging to Mu at the time of the biblical “Flood,” which destroyed its eastern half.

James also writes about several other colonies, including the Naga, Caucasian, Egyptian, Hindu and Maya colonies. This basic theme is continued throughout his other works as well; Mu was the Garden of Eden where mankind first appeared. Therefore, in James theories it is clear, Mu was not another name given to the Uighur.

Does James refer to the Uighurs as Turks?
Since the word ‘Turk’ does not appear in James’ works, it would be difficult to support this assertion. In three different works, James calls his Uighur as the forefathers of the Aryan race. Quoting from the Children of Mu:

The Uighurs were all of a light complexion, milk-white skins, with varying color of eyes and hair. In the north blue eyes and light hair predominated. In the south were found those with dark hair and dark eyes.

Obviously, James had subdivisions of his ancient Uighur but called them all Aryan. 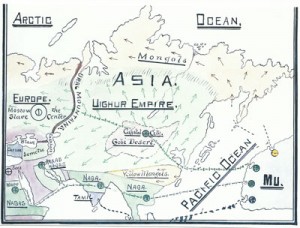 In James’ works, the Great Uighur Empire is a colony of his sunken continent of Mu lasting tens of thousands of years and encompassing most of Asia and Europe. Somehow, they end up spreading civilization around the world. Some may be forgiven if they missed the contradiction; James asserts all people came from Mu, his Garden of Eden. If everyone came from the ancient advanced civilization of Mu, who were the people that needed to be civilized? Where did they come from? James’ theory of an advanced civilization (whether it is Turks or Aryans) civilizing the world undermines James basic premise and inserts a paradox. If everybody was from Mu’s great civilization, they cannot meet other people not from Mu, or if people from Mu met other people, then Mu could not be where all the people came from. Furthermore, the use of his theory of ‘spreading civilization’ by either Turkic or Aryan peoples denies indigenous peoples their birthright. And it is wrong.

I have no control over how my great-grandfather’s words are used by others; however, I believe I have every right to point out the fallacies and how his theories are twisted to promote agendas he did not support. I also believe current researchers should abandon the use of unsubstantiated and discredited theories James espoused in the early 20th century; especially when they are used to promote racist and/or mythical nationalistic ideologies.

Please note, links to external articles are meant to provide a starting point for further investigation, should the reader so choose.