Posted on March 15, 2020 | Comments Off on Suspect Research website

As mentioned before, I occasionally receive emails with proof of my great-grandfather’s theories.
The link contained in a recent email appeared odd.
As shown below, the title of “Bullfinch Mythology” just doesn’t mix with the subtitle, “Stories of a Great Flood in Polynesia and Micronesia.”

Bullfinch’s Mythology is a 19th century classic, but I didn’t remember reading a chapter about flood myths. Given the benefit of the doubt, I’ll accept that it is probably an error.

The next lower title on the webpage is the title of chapter 13 of volume number 1 of “Folk-Lore In The Old Testament: Studies In Comparative Religion Legend And Law.” The three volumes by Scottish folklorist James George Frazer published in 1918 and not as well known as “The Golden Bough” which was first published in 1890.
One wonders why part of the title is missing?
Where are the notes contained in the original?

Further investigation was hampered when I attempted to navigate to another page for more data. My browser found a redirect command there and stopped the visit.
As far as I am concerned, that was strike three. I know where the original text is located and there is zero risk involved in accessing that text.
I do not know what games they are playing and I do not have to join.
Therefore, I will not provide a direct link to the website, proceed at your own risk.

Posted on January 7, 2018 | Comments Off on SPLC Equates Belief in Ancient Civilizations and Aliens With Being a Nazi

I should stop here and allow the reader to read the SPLC article and make up their own mind to avoid the inevitable name-calling and other nonsense my comments might draw; however that would be out of character.

First, I covered racism in one of my podcasts in 2009 (please listen to the end if you have yet to watch it.)

I completely agree with SPLC characterization of some theories being racist. I don’t have any hesitation to call it what it really is or to point it out when I see it. I also believe some people today support their racist ideology with the discredited theories of the past.

ON THE OTHER HAND – I do see problems with their broad generalizations.
First, not every person reading or researching the discredited theories of the past realizes or identifies with the underlying racism. While my great-grandfather’s theory proclaims an ancient advanced civilization ruled by white people, if you missed the one sentence where it is written in the beginning of his books, you may not recognize the racist content. Sure, there are other passages deemed racist; however unless you are a northern Australian bushman, James didn’t say nasty things about you or your ancestors. (see James Churchward, Mu, and Australia)
Grouping everyone who believes in ancient civilizations as a Nazi is like claiming everyone who voted for Donald Trump to be a Nazi or everyone who voted for Hillary Clinton to be a Communist. All three broad generalizations are equally distasteful (and I personally do not care to read any ad hominem attacks or hear your opinion concerning either candidate or their supporters.)

Second, holding historic figures up to today’s politically correct values and standards is a large load of male cow manure.
It also appears to be a vehicle to denounce and rewrite history. These people were products of their generation and held beliefs according to their upbringing and current societal norms; to discard them from history because of a self-righteous attitude stinks of elitist social theories. While we may object to aspects of people’s beliefs, I do not believe we should erase them from memory; there are other contributions to society and civilization they made while living within the system they were born into. If one day, some of the elitist theories are no longer in vogue and subject to the whims of self-righteous individuals, will it be OK to delete those people from history?

In summary – ANY person making decisions or statements based on someone’s skin color is racist. PERIOD

PS Does the SPLC have articles on organizations and people denigrating Caucasians or is that not considered hate?

Not a hoax.
Today, due to the misfortune of another author, I discovered a website offering free downloads of my book. While the book is definitely not a best-seller and the royalties have yet to allow me to even think about quitting my day job, it is the principle causing me to guard my intellectual property rights. I have written the contact address of the website (leakbook.info) requesting the immediate removal of my intellectual property. 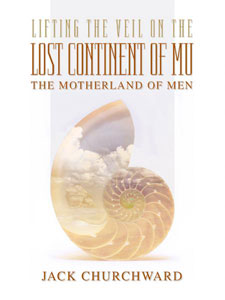 I will provide a free signed copy of my book, Lifting the Veil on the Lost Continent of Mu Motherland of Men, to the first person sending an email to me with the link to any other website illegally offering my book for sale, for free viewing , or any other use not consistent with applicable copyright laws.

Thank you for your time and attention,
Jack Churchward
jack@my-mu.com