The frontispiece for the 1932 Sacred Symbols of Mu features the following illustration: 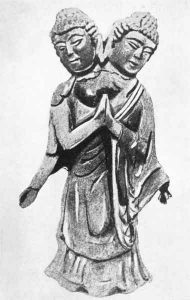 To set the record straight, the capital of the historic Great Uighur Empire was located in the Orkhon Valley of Mongolia, a little over 350 miles north of Khara-Khoto and although he attributes the image to Koslov, the frontispiece probably came from a 1924 article entitled “In the Secret Tomb of Earth’s Oldest Kings” in the American Weekly. The article is contained one of James’ scrapbooks and is included in my first book, Lifting the Veil on the Lost Continent of Mu Motherland of Men. 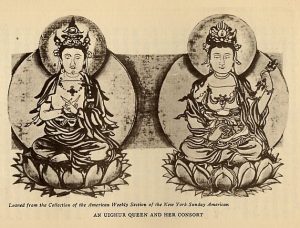 An Uighur Queen and Her Consort

Other images from the article are contained in the Lost Continent of Mu Motherland of Men, such as “An Uighur Queen and Her Consort” (page 108) and “Scepter carried by a monarch of the Uighur. Of later date than that shown in the hand of the Queen. Both show the trident” (page 109.) Both are attributed as “Loaned from the collection of the American Weekly Section of the New York Sunday American.”

In the American Weekly article, the ‘Uighur Queen’ image is captioned as “Paintings upon silk, as fresh to-day almost as they were when they were put away 8,000 years ago, and which reveal the sources from which China, India, and Persia copied the pictures and statues of their various Gods and Goddesses’

Scepter carried by a monarch of the Uighur. Of later date than that shown in the hand of the Queen. Both show the trident.

The ‘scepter’ also known as a Vajra is captioned in the article as: “A golden Scepter of one of the ancient kings found in the secret tomb.”

Despite both the article and James’ declaration that nothing could be removed from the site, the statue is part of the collection of the Hermitage Museum in Saint Petersburg, Russia. The object was discovered in Khara Khoto by Pyotr Kozlov inside a stupa in 1909.

A recent image of the statue can be viewed at: http://www.akshardhool.com/2015/03/black-castle-of-desert-part-iv.html.
The description reads:
Double Headed Buddha. The Mongol period of Khara-Khoto, Mongolia. (1227-end of the 14th century). Clay, straw, traces of painting and gilding. The State Hermitage Museum. Saint Petersburg. Russia.

A further description of the statue reads:
This story was told to a Chinese pilgrim during one of his long wanderings in the north:once upon a time, there were two men, both devoted to the teachings of Buddha. Each of them dreamed an image of the Buddha, but they were too poor to pay for two sculptures, so they asked an artist to make them only one. Buddha himself, in an act of kindness, divided the image in two. Kindness, or compassion, is an important teaching of Buddhism.
This clay statue was found in the stupa uncovered by Kozlov in 1909. The statue is made from the simple materials of earth and straw, but the artist has given the Buddha a smile and a gentle tilt to the head, and added colour and gold to the two faces to emphasise Buddha’s compassionate nature.

Other works of art and figurines are discussed in the same blog posting.

This entry was posted in Ancient Relics, Lost continent of Mu, Sunken cities/ruins. Bookmark the permalink.