Posted on February 14, 2011 | Comments Off on Another Mystery Solved – Princess Arawali Uncovered

Well, not any more uncovered than she already appears in the 1926 Lost Continent of Mu Motherland of Men by James Churchward as shown below. 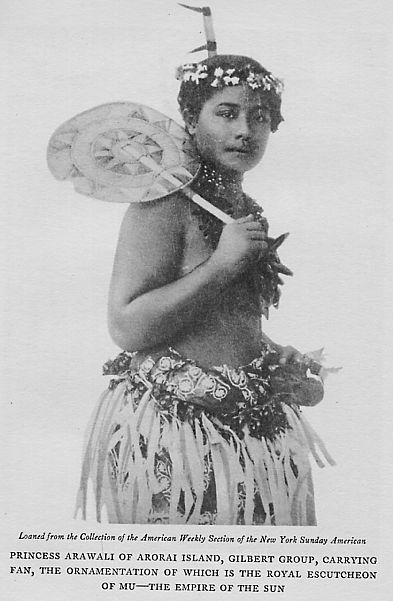 from page 47 of Lost Continent of Mu Motherland of Men

The accompanying picture is one from a brown race, Arawali, a native of Arorai Island of the Gilbert group, which lies about 4,000 miles southwest of Hawaii.
The picture shows a young lady with an extremely well shaped and well developed head, of pleasing countenance and gentle expression. It has been said of her that “she is a very gentle, lovable woman, but quick-tempered and slightly jealous, but very dignified notwithstanding her wretched surroundings. She is the daughter of the King of Arorai Island.”
Arawali’s head and face belong to the representative of a high type of civilization, although her dress is that of a savage. Poor Arawali! She is one of a tribe of cannibals, but, strangely enough, she herself has never tasted “long-pig,” the euphemistic name applied to human flesh by the natives. In her hand she carries a fan, the ornamentation of which is the royal escutcheon of Mu?the Empire of the Sun.
No ancient record has ever been found that mentions savagery as existing on any spot of the earth’s surface prior to the destruction of Mu. Then why did such magnificent specimens of man as the forefathers of the South Sea Islanders become degraded cannibals? Our story of the great calamity that overtook the first race of man answers this question. 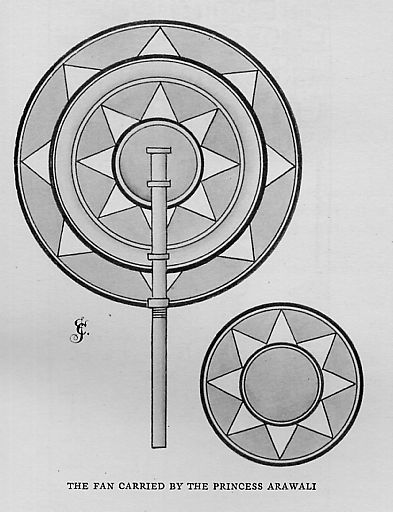 from page 49 of Lost Continent of Mu Motherland of Men

Thanks to the help of historian Yannis Deliyannis, creator and maintainer of the Chronicon Mirabilium blog, he has found an article in the March 26, 1911 edition of the American Weekly magazine section of the San Antonio Light entitled “My Home Life as a Cannibal Island King” and passed it along.

“My Home Life as a Cannibal Island King”
Ex Wall Street Stock Broker, Now a King, Tells How It Feels to Have Numberless Adoring Wives and Rule Over a Race of Hearty Eaters 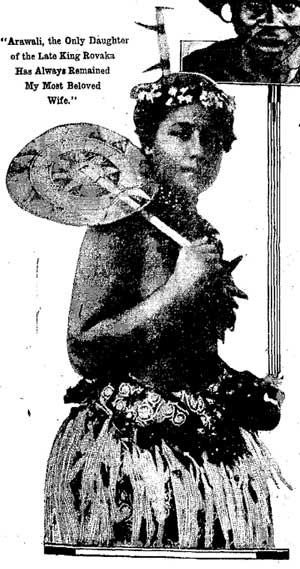 Arawali from the March 19, 1911 American Weekly Section of the San Antonio Light

The article begins:
“Archibald C. Everett, a former Wall Street stock broker, man about town, Beau Brummel and boulevardier of two continents, has become king of Aroral in the South Sea Islands…
“At last he came to Aroral, in the Gilbert Islands. It is in the midst of of the stupendous maze of islands scattered throughout the Southern Pacific. It is 1,500 miles from Samoa, the neaest place where there are extensive evidences of western civilization.
Mr. Everett fascinated old King Rovaka of Aroral. His handsome appearance, his smart clothes, his easy , genial manner, cultivated in Wall Street and the Gay White Way, captivated the venerable monarch. He begged Mr. Everett to consider everything on his island his, gave him his favorite and handsomest daughter in marriage and named him heir to the throne…
“Home, Sweet Home”
By Archibald C. Everett
Domestic life here is entirely free from the worries that accompany it in the United States and most European countries.
Here I find that a girl not only considers it an honor to marry me, but it costs me nothing and contributes to my support as far as it lies in her modest power.
During the six years I have been king of this island I have never refused to marry a girl, old or young, rich or poor. This, I believe, is the chief secret of my hold on my warm-hearted people.
At least once in each month I take a fresh bride, but I have no rule against admitting larger numbers to my household. Sometimes it happens that I receive as many as a dozen at a time. Families are large and rapidly growing in these islands. Whenever a father has a marriageable daughter he does not know what to do with, he presents her to me as a mark of his loyalty. It is an ancient custom, and I cannot but respect it.
The ceremony is always an occasion for a joyful gathering of the people of this and neighboring islands. Then they display their picturesque native customs. Wreathed in in hibiscus flowers and smiles, men, women and children dance and sing and pledge my health in cocoanut wine for three whole days and nights.
You must not suppose that the frequent acquisition and exchange of wives is destructive of permanent domestic affection. My darling Arawali, the only daughter of the late King Rovaka, has always remained my permanent and most beloved wife. She was the old king’s favorite daughter, and when I married her he named me his successor on the throne.
She presides over my household with perfect grace and modesty, never doing anything to disturb my peace and comfort, or that of my newer wives.
My wives are recruited from daughters of neighboring kings and leading chiefs of this island, and even from daughters of poor fishermen, why by their pleasing manners and appearance, may gain a place in my household. They are happy, simple, unaffected little creatures, whose only object in life is to minister to my pleasure and win my approval…

I also have no information about Mr. Everett’s life after July 1913, whether he ever visited his friends, brought his Princess bride to the United States, or what happened.
If any readers know what became of Archibald C. Everett or Princess Arawali, please pass it along and we’ll complete the record.