Posted on November 3, 2013 | Comments Off on Another Similar Ancient Symbol

Then, reading news about a discovery near the Bosnian pyramids, there was another such symbol.

Imagine my surprise when the Dispilio Tablets were examined and they also contain a similar symbol. 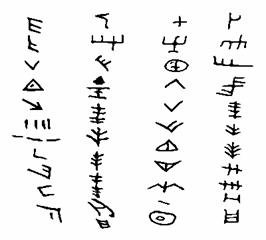 The oldest known writing – discovered in Northern Greece in 1993

While the similarities between these symbols is hardly proof that they are from the same people or have the same meaning, it does provide impetus to continue searching for a link between them – that might prove an ancient advanced civilization.

Keep on searching and have a great day.

This entry was posted in Symbols, Uncategorized. Bookmark the permalink.