Review of “Crossing the Sands of Time” from Archaeology Review

Posted on August 11, 2019 | Comments Off on Review of “Crossing the Sands of Time” from Archaeology Review 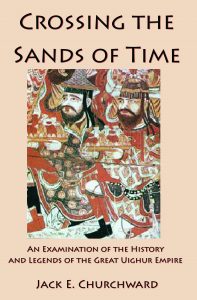 Today, Uighurs (pronounced WEE-gurz) are considered one of 55 officially recognized ethnic minorities in China and, although China rejects the idea that they are an indigenous group, they have a rich history in Inner Asia. This area is more commonly thought of as Central Asia and includes Kazakhstan, Uzbekistan, Kyrgyzstan, Turkmenistan, Tajikistan, and occasionally Afghanistan and Turkey. Since about the 10th century or so, Islam has been an important part of the Uighur culture and this is likely a contributing factor the significant oppression of their culture by the People’s Republic of China. Thousands of Uighurs today are being “re-educated” and forced to renounce their culture by the Chinese government.

In Crossing the Sands of Time, Jack Churchward tells a unique story centered around the Uighurs of Central Asia. It’s a story of the past but one that includes a bit of psuedoarchaeology and pseudohistory as perhaps originated by his great-grandfather, James Churchward. The younger Churchward, an electrical engineer by trade, has also made it his purpose to research the life and theories of the elder, and share this with others. Jack’s great-grandfather, James, happens to be the writer of a series of books on the lost continent of Mu, which was the home of a civilization that suffered a set of cataclysmic events, sinking beneath the sea but not before birthing the human race.

The book is short, but informative. Particularly if the reader is unfamiliar with Uighur (also spelled “Uyghur” but I’ll stick to the spelling on the book cover for consistency) culture. The first four chapters outline Uighur history beginning with a geographic description of Inner Asia along with a brief over-view of the peoples present in this region from the Paleolithic through to the pre-Uighur Khaganates of the 6th Century CE.

The second chapter provides a fairly detailed timeline of the Great Uighur Empire from the mid-6th Century CE to around the middle of the 11th Century CE.

In chapter three, Churchward briefly describes the lasting affects the Great Uighur Empire had on Inner Asia including the spread of Islam among the Uighur people and their migrations throughout Inner Asia and the Tarim Basin in particular.

In the final chapter of Part 1, Churchward reflects on the more recent notions of Uighur culture and their modern identity as an ethnic minority. There’s also an essay by Erkin Alptekin, a Uighur activist living in Germany, addressing the question, “is Eastern Turkestan a Chinese Territory?” Alptekin also wrote the forward to the book.

If Part 1 of the book was the historical/factual section, interspersed with mentions of historic accounts and descriptions of archaeological assemblages of various sites, Part 2 is the section that dives into the alternative/fringe views that were originated in the 1920s by James Churchward, the author’s great-grandfather.

Why All the Sudden Interest in the Great Uighur Empire by the Chinese Government?

Posted on August 4, 2019 | Comments Off on Why All the Sudden Interest in the Great Uighur Empire by the Chinese Government?

On the heels of the release of my latest book, Crossing the Sands of Time: An Examination of the History and Legends of the Great Uighur Empire the Chinese government has come out with a propaganda white paper. This new white paper incorporates the CCP‘s version of the history of the Great Uighur Empire and the Taklamakanians (the Uyghur.) The Chinese government document cherry picks certain historical events and completely forgets others to make a feeble attempt to justify their occupation of the Uyghur homeland, East Turkestan. China also uses it to justify the ongoing cultural genocide and concentration camps.

Coming so close to the release of my new book, it almost reads like a rebuttal and makes me wonder…

Crossing the Sands of Time provides a brief, non-academic history of the Great Uighur Empire and the Taklamakanians (the Uyghur,) as well as discusses other theories using the same name.
Available in eBook, and your choice of color or black & white paperback.
Signed available copies at the My-Mu.com bookstore

Comments Off on Why All the Sudden Interest in the Great Uighur Empire by the Chinese Government?