Megalithic Evidence of the Lost Continent of Mu

As examples of the ancient, advanced civilization of now-sunken Pacific Ocean continent of Mu, James Churchward lists some megalithic ruins in the South Pacific to support his assertion.

there are existing ruins which, by their location and the symbols with which they are decorated, tell of the lost continent of Mu, the motherland of man…
…On some of the South Sea Islands, notably Easter, Mangaia, Tonga-tabu, Panape, and the Ladrone or Mariana Islands, there stand today remains of old stone temples and lithic remains which take us back to the time of Mu.
“Lost Continent of Mu Motherland of Men”; page 21.

James identifies twenty-one such ruins built by the people of Mu across the Pacific and the Yucatan. The size and weight of the component stones used in these monuments when coupled with the proposed antiquity immediately begs the question, “How could a primitive people accomplish such a feat?” Some even suggest the feat is impossible today given our advanced technology. Either Aliens or Giants helped or they had some special now-forgotten technology to get the job done, depending on the snake oil they are selling.

Everyone is familiar with Moai of Easter Island, the enormous monolithic stone statues spread out across the island. More than 900 were created and the tallest of these is thirty-three feet high and weighs 82 tons. A few years ago, some scientists got together and demonstrated one method of moving them as shown in the following video. It was estimated the Moai could have been moved into position in two weeks.

That may work for some of these enormous statues, but how could they move and place the blocks in evidence on the other islands?

There are also similar examples on the Indonesian island of Nias and the Anagami Naga from Nagaland in northeastern India. This doesn’t disprove Aliens from outer space or Giants helped with moving heavy objects or some special now-forgotten technology was involved, however using Occam’s Razor, we have to exclude them. Simple stated, Occam’s Razor can be interpreted as:

“Among competing hypotheses, the one with the fewest assumptions should be selected.”

Now some will say these primitive people didn’t have the manpower to accomplish these tasks, so it had to be something else, like Aliens, Giants or special now-forgotten technology. Alas, these people forget to mention Wally Wallington. Mr. Wallington (website: http://www.theforgottentechnology.com/) relates incredible feats including moving a 15-ton pole barn 200 feet with only 40 man-hours of work and starting a replica of Stonehenge with eight ten-ton blocks and 2-ton blocks on top, alone. 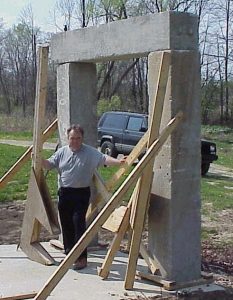 My first 1 man Stonehenge replica of 2400 lb. blocks put in place with no hoisting equipment.

More comprehensive video is available from Mr, Wallington on his DVD, but there is a news video:

Not to be outdone, Gordon Pipes, another carpenter, demonstrated one more method to move twelve ton blocks without hundreds of people.

As far as these ancient monuments requiring extraterrestrials, giants or special now-forgotten technologies, it is plain to see there had to have been a false assumption. Maybe it is in the question
“How could a primitive people accomplish such a feat?”
Why would someone word the question in this manner, especially to use the word ‘primitive’? Is there some bias preventing us from acknowledging others to be superior in some respects; to have knowledge and/or skills we do not yet possess?

We are all one big human family and to think any particular segment is superior to another and has nothing to learn from their relatives sounds a little silly. We are all on this planet together; the self-imposed barriers preventing people from realizing our shared human existence and working together for the good of all people shows maybe we are the ‘primitive’ ones, and not our forebears who worked together to create lasting monuments to the solidarity of their people.

James Churchward’s mention of vimana or the mythical flying palaces or chariots from Sanskrit and Hindu writings have become references in many books and some even ascribe their interest in these flying ships to his discussion of them in the following passage:

Hindu Manuscript, Date unknown (B.C.): “When morning dawned, Rama, taking the celestial car which Pushpaka had sent to him by Vivpishand, stood ready to depart. Self-moving was that car; it was large and finely painted. It had two stories and many chambers with windows and was draped with flags and banners. It gave forth a melodious sound as it coursed along its airy way.”

Hindu Manuscript, Dated 500 B.C.: “Rawan, King of Ceylon (?), flew over the enemy’s army and dropped bombs, causing many casualties. Eventually Rawan was captured and slain and his flying machine fell into the hands of the Hindu chieftain Ram Chandra who flew it all the way back to his capital Adjudhia in Northern India.”

Without question both of these manuscripts were taken from the same temple records at Ayhodia, as was the Rama and Sita poem, referring back 20,000 years ago.

Maha Bharata (1000 B.C.) : Mention is made in this ancient book of the “gift of a flying machine” by a king to a brother monarch as a token of friendship.

These are the most detailed accounts I have found about the airships of the Hindus 15,000 to 20,000 years ago, except one ‘which is a drawing and instructions for the construction of the airship and her machinery, power, engine, etc. The power is taken from the atmosphere in a very simple inexpensive manner. The engine is somewhat like our present-day turbine in that it works from one chamber into another until finally exhausted. When the engine is once started it never stops until turned off. It will continue on if allowed to do so until the bearings are worn out. These ships could keep circling around the earth without ever once coming down until the machinery wore out. The power is unlimited, or rather limited only by what metals will stand. I find various flights spoken of which according to our maps would run from 1000 to 3000 miles.

While modern Hindu historians look upon the Ramayana and some other Hindu writings as myths, the Hindus themselves do not: they know better; so do I. We know their origin and from what they were taken. They are not myths; they are histories written in the usual style of their time. They are, generally speaking, extremely symbolical, and because historians have failed to understand these symbolical writings, they have classed them as myths.
Children of Mu
pages 187-189

While I have respect for all religious beliefs (except those beliefs condemning me to death or grievous bodily harm,) I must take issue with my great-grandfather’s statement, “While modern Hindu historians look upon the Ramayana and some other Hindu writings as myths, the Hindus themselves do not: they know better; so do I.”
James also believed humans walked around with dinosaurs and evolution was fiction which are beliefs held today by some religious authorities, but it does not make it true. There is no proof of these flying machines from ancient mythology, like many other fantastic stories from centuries old texts.

Author Stephen Quayle, as a guest on the Coast to Coast AM show discussed a report of a discovered vimana in February 2011. Apparently, the story originated on the ‘whatdoesitmean.com’ website from December 2010 under the title, “World Leaders Flock To Afghanistan After Mysterious ‘Time Well’ Discovered” with a follow-up in August 2011 entitled, “Russia Reports Exploding Afghan “Time Well” Killed Elite US Navy Seals.” The author, Sorcha Faal, provides many conspiracy theories on his website, not to mention the account has a few plot elements of a movie released in 2008.

I would note the repeated mention of this ‘news’ on click-bait websites and passed along in social media since 2012. The next folks who pick it up and run with it don’t even wait until the furor from the last posting dies down. There are websites telling the truth and any website running with a lead story about vimanas, time-wells, dead US soldiers, and world leaders is definitely not one of them.

Posted on August 3, 2016 | Comments Off on Hyperdiffusionism and Mu 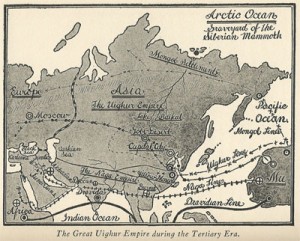 Asia during the Tertiary Era

The definition of hyperdiffusionism in archaeology as provided by wikipedia is:

Hyperdiffusionism is a hypothesis stating that one civilization or people is the creator of all logical and great things, which are then diffused to less civilized nations.

Does this really apply to Mu?
According to the writings of James Churchward, Mu was the ‘Garden of Eden,’ the ‘Motherland of Man’ and the well-spring of civilization and culture. An egalitarian society in theory (although white people were in charge) everyone was adequately fed, sheltered and educated with equal rights.

If everyone came from Mu (i.e., the ‘Garden of Eden’,) then there should have been no ‘less civilized nations’…

On the other hand, James also attributes the collapse of the white civilization in central America and Mexico to the Mongols. If so, then James’ narrative has an inconsistency. Also, maybe the opposite of hyperdiffusion would be the case since the ‘less civilized nation’ takes out the ‘advanced’ civilization.

In any case, whenever you hear that some advanced people came and provided culture, technology and a higher civilization to another people, look a little closer. Supposedly, the advanced ‘Moundbuilders’ created all the mounds scattered across the US until the ‘savages’ drove them away, but today we know the Native Americans built the mounds, not some foreign people. The same is true for central America and Mexico, the Maya still live there today and they built the monuments, not some superior white folks.

Comments Off on Hyperdiffusionism and Mu