Posted on October 21, 2013 | Comments Off on Denisovan Hominids

From the cave in Siberia where the first remains were found, one might expect to find their genes in the people of Inner Asia, but their descendants are located essentially south of Borneo, south of the “Wallace Line” on the map below. This is the same general area where the ‘Hobbit’ people were discovered. 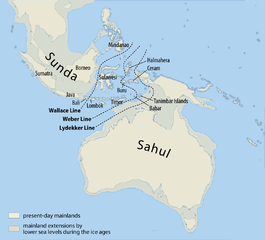 Neanderthal and humans also left evidence of their presence in the same cave, along with the DNA of another ancient unidentified hominid.

Not too many years ago, the theory was humans originated in Africa and populated the earth, eventually killing all the other hominids as they progressed (and all the mega-fauna.)
Now science tells us that non-Africans contain about 4% Neanderthal genes, and humans also have genes from other hominids. Instead of killing them, it appears we were fornicating with them and data has shown the climate (not humans) are the cause for the collapse of populations of mega-fauna.
Can it get more twisted? I certainly hope so.

This entry was posted in Miscellaneous. Bookmark the permalink.