Posted on February 23, 2014 | Comments Off on Examining the ‘Mound Builder’s Calendar Stone’ Part 1

Recently I saw one of the ‘artifacts’ contained in my great-grandfather’s book, Sacred Symbols of Mu, shown as proof that the first indigenous people of the Americas were the Washitaw de Dugdahmoundyah. My great grandfather captioned the artifact to be a “Mound Builder’s Calendar Stone,” as shown below. In the website linked above, it has become the “Washita Calendar Stone” and you already know there are other names as well. 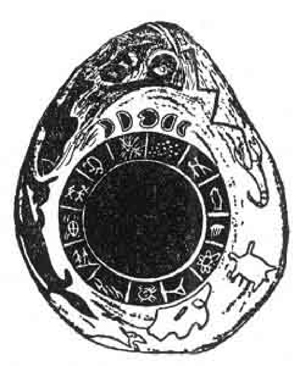 The use of my great-grandfather’s name and/or theories to bolster or support the claims of the Washitaw de Dugdahmoundyah to be the only indigenous people of America were discussed in the following video entitled “James Churchward and the Muurish Empire Washita,” released in June 2010.

Essentially, according to James, all people are/were from Mu, which precludes any one people from claiming sovereignty over any other people. Another point that James made in his books was:

“As is shown by various documents, Atlantis had a colored population in the south. I have never come across any documents showing that any Negroes were known in Central and North America. Being in Atlantis and none being in Central and North America, the question was: how did they get into Atlantis? Subsequently the Tibetian map answered the question – they came through the Amazonian Sea, therefore, never touched Central or North America.”
Children of Mu page 101 (emphasis added)

In summary, the use of James Churchward’s name and theories to support or lend credibility to the theory of a black indigenous people in North and Central America is academic and scholarly fraud. While there may be other compelling evidence to suggest some validity to their claims, my great-grandfather’s writing provide none to that end.

Now, examining the ‘Ancient Washitaw Calendar‘ stone used as evidence of the Washitaw people claiming to have inhabited the Americas for 25,000 years:

Although an image of the “carved sandstone boulder” is contained in the book, Sacred Symbols of Mu, authored by James Churchward, there is nothing in the discussion of the artifact that links it to Washitaw de Dugdahmoundyah, except that it was said to have been found in the Ouachita River, in Arkansas. One of the tenets of the Washita is that they link themselves with a 3500 year-old mound structure in Ouachita Parish, Louisiana, but that is not where the calendar stone was found, despite the similarity of the names.

My great-grandfather’s discussion of the ‘Calendar Stone’ from the Sacred Symbols of Mu is covered in the next installment of our examination of the background of the ‘Mound Builder’s Calendar Stone.’