Father Crespi and the Lost Continent of Mu

Posted on April 5, 2020 | Comments Off on Father Crespi and the Lost Continent of Mu

When Eric Von Daniken published Gold of the Gods in 1973, it provided an amazing account of a search through the Cueva de los Tayos, the Tayos Cave. Inside was a library of metal plates, gold artifacts and evidence of an ancient, advanced civilization. Father Crespi, a Salesian monk living in Cuenca, Ecuador obtained some of them and eventually amassed a large collection of artifacts. The video below shows some of the artifacts and a portion of the metal library.

In previous postings, the subject of the Tayos Cave has been addressed (see Follow-up on the Cueva de Los Tayos (Tayos Cave).) 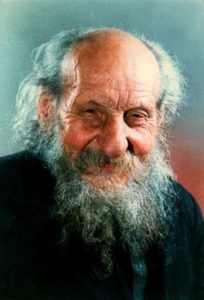 To summarize:
An Ecuadorian Major (Petronio Jaramillo,) stationed in Cuenca, Ecuador created a story after he retired about a cave with ancient artifacts and a metal library of ancient knowledge. Juan Moricz learned about the story and told it to Eric Von Daniken. Von Daniken included the tale (and embellishments) in his book, Gold of the Gods. Subsequent expeditions to the cave have shown no evidence of either Jaramillo’s or Von Daniken’s claims. One element of the story is the ‘metal library.’ Metal plates did exist in the collection of Father Crespi, however, as will be shown, they were/are not a library of ancient knowledge. 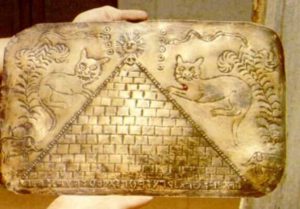 Pino Turolla in Beyond the Andes – My Search for the Origins of Pre-Inca Civilization relates visiting with Father Crespi and examining his collection, including the metal plates.

“If I needed any further proof of the doubtful origins of the collection, it came when, with a rather hushed reverence, Father Crespi removed a yellowish metal orb from a concave plate, extended it towards me, and said: “Very ancient, my son, very ancient – with glyphics.” I looked closely at this mysterious orb and it proved to be a float from a toilet mechanism, bearing the legend “RF” (Republique francaise). I chuckled and looked at Father Crespi, thinking he was playing a joke on me. But his face was very serious as he said, “very old, my son, probably three thousand years before the birth of our Lord.”
Beyond the Andes – My Search for the Origins of Pre-Inca Civilization – page 167

After speaking with Father Crespi, Turolla visited the Father Superior, Father Pedro Lova, to ask about the collection. He asked why a barn should house the valuable collection and was answered, “we don’t have the money.” Many months later after becoming better acquainted Father Lova confessed that Father Crespi’s collection was an embarrassment both to himself and the order. When asked if he knew where the collection came from, Father Lova said Father Crespi was secretive and asked if Turolla would find out for him.

At first, I found myself confronted with a wall of silence as I checked around, talking to oldtimers in the area about Father Crespi. There was a definite reticence on their part; but gradually the story emerged. Decades ago, Father Crespi’s mind began to change and he became fascinated with the idea that the ancient Ecuadorian civilizations had sprung from Egypt. He believed that one of the Pharaohs had left Egypt and sailed across the Atlantic Ocean to the mouth of the Amazon. Then he navigated this great river, crossed the east Andean range, and established himself with his court in the southern part of what today is known as Ecuador. Father Crespi gathered together books and pictures of Egyptian, Phoenician, and other Old World cultures, gave them to the natives, and said: “If you ever find anything like this, bring it to me, and I will reward you.”

The Indians and mestizos, being only too glad to oblige, took the pictures and made artifacts according to the designs they had been given. Then they brought them to Father Crespi, telling him they had been found in tolas, tombs, landslides, or whatever. This exchange had been going on for many decades; Father Crespi’s collection continued to grow and some of the native craftsmen had become quite expert in the fabrication and decoration of “ancient” objects made from very modern bronze, brass, copper, and tin.
Beyond the Andes – My Search for the Origins of Pre-Inca Civilization – page 169

The Central Bank of Ecuador purchased many of the artifacts after Father Crespi passed away, however the ‘metal library’ was not among them and remained missing for years.

In March 2016, an internet report yielded that a group of researchers visited Ecuador and saw the artifacts from the Father Crespi collection as well as the “metal library.” The artifacts have been well-cared for, catalogued and housed in storage rooms in the Central Bank of Ecuador. On the other hand, the locked storage area of a dilapidated old building housed the “metal library” in a different location. The scattered plates were obviously not considered to be of any value. In the words of the researchers, “they still looked like little more than modern-day carvings on cheap metal.”

This entry was posted in Ancient Relics, Lost continent of Mu. Bookmark the permalink.