In the first part I had only witnessed the back cover of Children of the Rainbow: The Religion, Legends and Gods of Pre-Christian Hawaii. The mention of “legends and myths concerning the people of the Mu” could fill in some of the many blanks in my research about the life and theories of James Churchward. 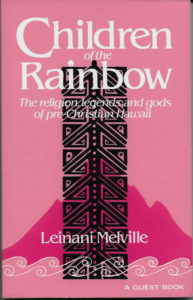 After ordering the book, I didn’t have to read very far to realize “the Mu” did not exactly equate to my great grandfather’s theory, which may be a good thing. However, the author’s judgmental tone soon reminded me of my great grandfather. In a funny twist, the author uses some of the very literary techniques James used copiously in his works. In dismissing accredited experts, Melville rejects non-native scholarship on the subject and James does the same thing on many topics, rejecting even native research where it disagrees with his theories.

Another point of agreement between the authors is the Mu brought civilization to the world and that is where the similarity stops. Churchward wrote there were millions of full-sized people living on the now sunken continent of Mu. Melville describes them as the original inhabitants of Hawaii and they were little people. (Susan Martinez in The Lost History of the Little People says all the Hawaiian folklore calls the little people the “menehune” and her little people also brought civilization to the world.)

One point the author makes concerning non-native scholarship is the change in words that used to begin with T to now be spelled beginning with K. For instance, instead of calling a well-respected, educated individual in Hawaiian society a Kahuna; Melville spells it Tahuna and the individual is a “doer.” I found nothing to indicate spellings actually changed anywhere else. Could be part of a new movement (back in the 70s.)

At some point, you have to put the book down and look for something to corroborate what you’re reading. For example, do the names of the gods mentioned match any of the Hawaiian gods mentioned in other literature on the subject (noting the possible swapping of “K”s)?

In reading the obviously non-native information on Hawaiian religion in Wikipedia I came across the following sentence:

In the 1930s, non-Hawaiian author Max Freedom Long created a philosophy and practice he called “Huna”. While Long and his successors have misrepresented this invention as a type of ancient, Hawaiian occultism, it is actually a New Age product of cultural misappropriation and fantasy, and not representative of traditional Hawaiian religion.

Digging a little deeper, I found Children of the Rainbow listed on website espousing the practice of Huna. Maybe the folks are in error by including the book, but it reads like a New Age religion and it is published by The Theosophical Publishing House. They are also responsible for publishing the Book of Dyzan, purportedly an ancient Tibetan text. Just like the Naacal Tablets, the Book of Dyzan was never seen by anyone else and is widely accepted as a hoax.

To further research the Children of the Rainbow, a detailed comparison of the ideas in the book against those of Huna, the creation of Max Freedom Long, would be required to ascertain if it is indeed a “Huna book.” Max Long started writing his twelve or so books in the 1930s and fit right in with other New Age authors. I will leave this task to others as the answer is of no interest to my research. Just like other authors who borrowed the name, the Children of the Rainbow bears very little resemblance to my great-grandfather’s theories (even though others think readers of James Churchward’s works will find it familiar.)