Posted on October 6, 2019 | Comments Off on Hawaiian Evidence of Mu?

Recently, I received an image file of the back cover of a book purporting to describe evidence of the lost continent of Mu. 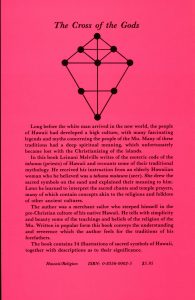 Thankfully, the image has an ISBN number so the book can be identified. Published in 1969, the ISBN belongs to Children of the Rainbow: The Religions, Legends, and Gods of Pre-Christian Hawaii (A Quest book). Apparently the version on sale on Amazon may have a different cover.

“Long before the white man arrived in the new world, the people of Hawaii had developed a high culture, with many fascinating legends and myths concerning the people of the Mu.”

The symbol depicted on the back cover jumped out at me as being familiar. Not from James Churchward’s published works, but from the Kabbalah, a work of Hebrew mysticism (and later in other forms as well.) 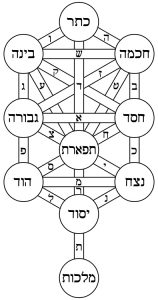 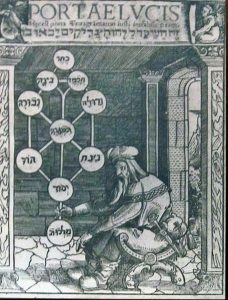 Since I have not yet read the work, I can’t comment on the contents. To be fair, the 183-page book was published during a period when a few authors were taking advantage of the new popularity of James Churchward’s Mu books. For instance: Mu – Fact or Fiction in 1963, Mu Revealed in 1970, and Understanding Mu in 1970. We can also add Lost Tribes and Sunken Continents (1962), Lost Continent for the Millions (1969), and the republished Lost Continents by L. Sprague de Camp in 1970.

From the back cover, we learn the author is male, however the name provided in the Amazon listing is Leinani Melville. According to Wiktionary, Leinani is a female given name.

Referencing the high culture achieved by the Hawaiians, they were accomplished seafarers before other peoples ventured beyond sight of land. On the other hand, James Churchward’s version of Mu relegated Pacific islanders to be savages after the collapse of the Archeon Gas belts and the sinking of Mu. In James’ world view, it was the adventurous white Muans that spread culture and civilization around the world.

Maybe they are not the same Mu, I’ll know more after the book arrives.