Posted on February 9, 2020 | Comments Off on Historical Data from Ancient Records and Ruins of Mexico and Central America Part 1 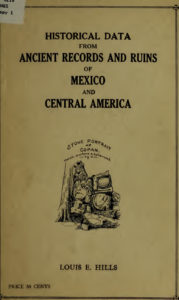 Recently a copy of Historical Data from Ancient Records and Ruins of Mexico and Central America (1919) by Louis E. Hills was posted to social media. My interest was the possibility of further information on William Niven’s discoveries since it was published around the same time period. I was not disappointed and found two references to William Niven:

Page 10
RECENT DISCOVERIES IN THE VALLEY OF MEXICO
Now late and important evidences come from the valley of Mexico, in an article from Professor William Niven (a man of considerable fame), whose article was published in the San Antonio Express.
“He tells of discoveries of world-wide interest, that promise to change history, and which startlingly corroborate legends supposed to be pure myths, that have come down to us from the dim, dim past
“He has found evidences of three distinct civilizations that have inhabited the Valley of Mexico at different periods, “classed by me,” he says, “as Aztec, Pre-Aztec, and primitive.”
This extract from his article I call especial attention to: “Some of the bones show a race of people over the average of the ordinary size.” Here, then, is the latest evidence of a large race of people once living upon this continent, called Quinames, or giants, in the traditions, and they were the primitive colony who landed at Panuco, built Tula, settled in the Valley of Mexico, and built Cholula and the great pyramid still to be seen there.
San Antonio (Texas) Express, April 14, 1918

Page 47
BABYLONIAN DESIGNS AND STRANGE CHARACTERS FOUND IN THE VALLEY OF MEXICO.
By Prof. Wm. Niven
“Archaeological discoveries in excavations now being made in the Valley of Mexico.”
“The valley lies a vast emerald oval, surrounded by towering mountains, wonderfully beautiful is the scene of softly sloping and fertile country.”
“In all the localities where archaeological ruins abound in this country there is probably none of such vast importance for the student and explorer as in the Valley of Mexico.”
“Some of the bones (of the primitive people) show a race over the average of the ordinary size. Many of these pre-historic persons have been more than six feet in height. Very, very few arrow heads are found, needles made from bone are plentiful, the needles with a hole near the point show they knew the art of knitting. Spindle whorls, similar to those found in Troy, were found in vast numbers, and all of them have strange characters and designs, which are more highly artistic than those found in Egypt. Eagle heads are also plentiful, with curious Babylonian characters and Grecian decorations. Cylinders for the rolling of manuscript with Babylonian designs are found. No doubt they knew the art of writing and printing, as is shown by seals which are found in quantities.”
San Antonio (Texas) Express, April 14, 1918

Looking at the document as a whole, author Hills uses many references to provide proof of giants as the original primitive peoples of Mexico and Central America, which he also calls Quinames. According to Wikipedia, the Quinametzin from Aztec mythology populated the world during the previous Sun of Rain era and are described as ten feet tall and weighing 650 pounds. 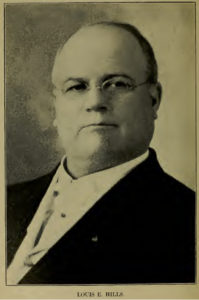 A little bit of digging shows that Louis Hills was a researcher of the Reformed Church of Later Day Saints. He also believed that Hill Cumorah was in Central America instead of New York. I am not a scholar of the Book of Mormon or a Mormon, so the significance is lost on me. However, Hills’ evidence purports to support the location of this iconic hill in Central America and/or Mexico. Supposedly, the evidence of giants in Mexico and Central America indicates the Nephites, (one of the people in the Book of Mormon who left Jerusalem in 600 BCE and lived in the Americas,) were the Nephilim, sometimes translated as giants. Archaeological evidence doesn’t support the existence of giants in Mexico or Central America.

Unfortunately, I have been unable to find the original article referenced by Mr. Hills.

Niven’s declaration of ‘some of the bones show a race over the average of the ordinary size’ and ‘many of these pre-historic persons have been more than six feet in height’ does not actually provide solid evidence for giants; merely that some of the prehistoric peoples he discovered in his excavations were larger than normal.

On the other hand, Niven did write about his theories of the buried cities of Mexico and that his most advanced civilization was found at the lowest of three layers he discovered. This lowest layer of archaeological material was described by Niven as bearing a resemblance to ancient Egypt and Babylon. He also wrote about the many figurines of many different peoples also unearthed from his excavations.

In part 2, I’ll provide some more information on the articles that William Niven wrote and where he was mentioned prior to 1919.