Recently, I became aware of a suggested link between the ‘Gosford Glyphs‘ (aka as the ‘Kariong Hieroglyphs’) in Kariong, New South Wales, Australia and the theory of the Lost Continent of Mu as described and written about by my great grandfather, James Churchward in his books.

The carvings appear on two parallel sandstone walls about 49 feet (15 m) long and appear to advance Churchward’s theory of Mu.
In particular, the highlighted carving in the following image has been interpreted as “Mu is sunk.”

A proponent of the theory published his interpretation as follows:

Unfortunately, in the 1926 ‘Lost Continent of Mu Motherland of Men,’ James wrote:

AUSTRALIA.—Australia appears to be particularly bare of ancient records, legends and traditions, which is not to be wondered at if my geological deductions about Australia are correct.
Geometrical figures have been found rudely carved on some of the boomerangs of the Northern tribes. The bushmen of Northern Australia are probably the lowest type of humanity on earth, lower than the ordinary forest beasts.
This sketch is a reproduction of an Australian cave painting which, without doubt, antedates their low savagery.
There are three remarkable objects in this painting: the first is Ra – the Sun – and the second is the numeral 3, symbol of Mu, shown twice, and the third is an axe.
When the English first settled in Australia, axes of any description were unknown to the savage natives. 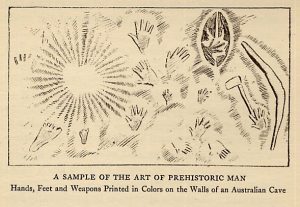 A SAMPLE OF THE ART OF PREHISTORIC MAN
Hands, Feet and Weapons Printed in Colors on the Walls of an Australian Cave

Obviously, James did not have a very high opinion of the Australian aborigines which flies in the face of his ancient advanced civilization of Mu. Since everyone came from his lost continent and there was no evolution of the human species, where did the bushmen, the “lowest type of humanity on earth, lower than the ordinary forest beasts” come from? His description of Mu as a virtual paradise with no suffering would have chased the forebears of these people into the woods to die, as he explains concerning the discovery of Neanderthal and other remains.

In their excitement over the discovery of a few old human bones, such as the Neanderthal, Piltdown, and Heidelberg man, scientists, in both Europe and America, have completely ignored and cast aside the remains of ancient man in North America. That the European remains were those of idiots and degenerates is obvious from the abnormal shapes of their skulls. Doubtless they were outcasts from civilized communities…
Lost Continent of Mu Motherland of Men, page 171.

In spite of evidence the carvings were created in the twentieth century, there are individuals insisting these are proof of a link between Egypt, Australia, and Mu. My only remaining question would be, how do they interpret the symbol to the left of the ‘Mu is sunk’ carving highlighted in the image below? 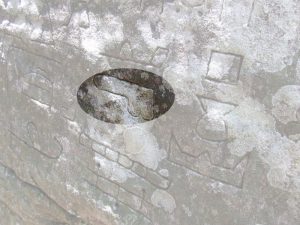 Have a nice day!

This entry was posted in Lost continent of Mu, Sunken cities/ruins, Symbols, Uncategorized. Bookmark the permalink.