Posted on October 7, 2018 | Comments Off on James Churchward’s Last Book…

In previous posts I have mentioned the names of James Churchward’s unpublished manuscripts. For instance earlier this year in James Churchward’s Lost Manuscripts on Mu.
His short volume 1927 entitled, Copies of Stone Tablets Found by William Niven at Santiago Ahuizoctla Near Mexico City is contained in my book, The Stone Tablets of Mu.
And there are some I am not yet at liberty to divulge and there may be some in your attic if you recognize the people in these pictures and video.

I happened to run across the front page article from the Los Angeles Times from January 5, 1936 which mentioned he had moved to Los Angeles from his home in Mount Vernon for health reasons and to finish his fifth book, Shadows of America’s Great Past.

His death was also covered in the Oakland Tribune and included a picture.

James is buried in Kensico Cemetery in Valhalla, New York. 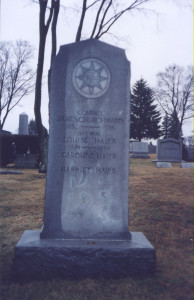 This entry was posted in James Churchward, Lost continent of Mu, References to James' work. Bookmark the permalink.