Posted on December 19, 2015 | Comments Off on Looking for the Great Uighur Empire Capital Part 4

To repeat the question from the end of Part 3:
See also Part 1 or Part 2.

At least one question arises, “How much of this newspaper article can be believed?” For instance, was Khara Khoto really the capital of Chinggis Khan and his grandson Kublai?

First, Temujin was given the title “Chinggis Khan” which can be translated as “Leader of All Who Live in Felt Tents.” He and his people lived in yurts on the grasslands of Inner Asia. When Ogedei succeeded the great Khan, he built the Mongol capital at Karakorum, in the Orkhon Valley.
In the Google Earth map below, Kharakorum is shown to the north of the square and enclosed Erdeene Zuu monastery. 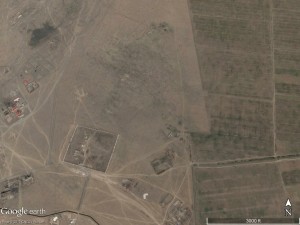 Karakorum lies to the north of Erdeene Zuu monastery

This was the capital of the Mongol Empire from 1235 to 1260 and later the Northern Yuan in the 14th and 15th centuries.

But how close is Karakorum to Kara Khoto? As shown in the following map, they are not very close (about 385 miles). 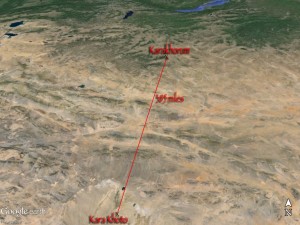 So maybe the article (and James Churchward) did not get it right about the city of Kara Khoto being a city of Chinggis Khan, but what about his grandson, Kublai? Kublai lived in Karakorum until he became the 5th Mongol Empire Kagan and finished conquering the Chinese empires. Kublai created the Yuan dynasty and built his capital at Khanbaliq in what is now known as Beijing.

The map below places the different places in perspective – Kara Khoto or the Black City is over 800 miles from Beijing or Khanbaliq. Again, the contents of the newspaper article are called into question. 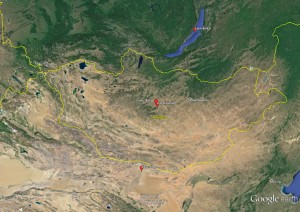 So, according to the newspaper article and the works of James Churchward, the ancient Uighurs of 70,000 years ago had their capital at Kara Khoto, but where is this capital in relationship to the historical Great Uighur Empire/Khaganate (744-840)?

Visit part 5 for that answer.