In recent news, some petroglyphs found near Pyramid Lake, Nevada have been dated to 10,000 or possibly 14,800 years old.
While some of the carvings do resemble a symbol from Nevada that my great-grandfather, James Churchward, showed in his book “Sacred Symbols of Mu,” his explanation is that it is an animal track and not a symbol (see #40 in illustrations below.) 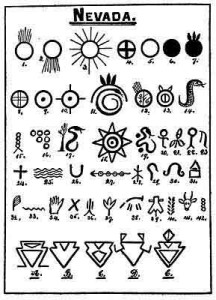 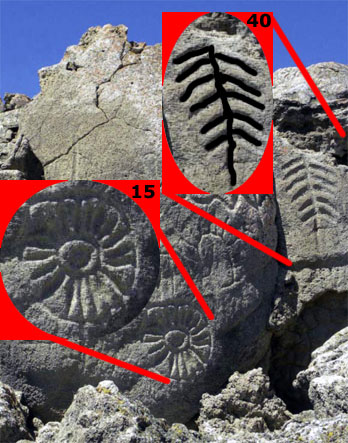 There is another symbol from the “Sacred Symbols of Mu” seen on the outcropping of rock. Although James does not relate it to the American Southwest, it is cited as a symbol of the Mound Builders culture, also in the United States. A symbol similar to the shown above (#15) is depicted on page 227 of the Sacred Symbols of Mu. James’ interpretation/translation is as follows:

Fig. 15 shows the earth’s Forces passing out of her body into the atmosphere (they are drawn out by their affinitive Forces carried in the Sun’s rays). Earthly Forces like elements become exhausted, and when exhausted the Sun’s affinitive Forces have no further attraction or control over them. The Central Magnet then proceeds to draw them back into the great frictional line where they are regenerated and again sent to perform the duties required of them by nature. I may say further that this example of the workings and origin of earthly Forces may also apply to all revolving bodies throughout the universe, and thus show that a single Divine system is controlling the Universe.
Sacred Symbols of Mu page 228 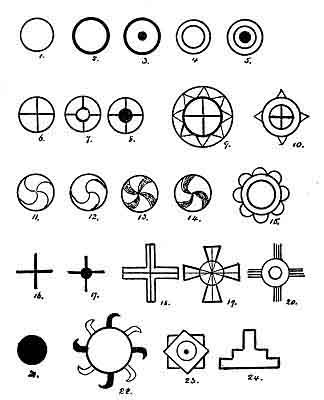 Maybe as more of the symbols are revealed, even more will coincide with the symbols that James wrote about.

This entry was posted in Lost continent of Mu, Symbols. Bookmark the permalink.