Posted on December 2, 2015 | Comments Off on Niven’s Tablet Discoveries – An Update 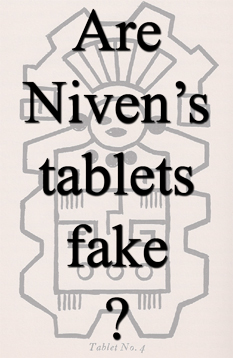 My research has always been about uncovering the truth.
Earlier this week I read that an archaeologist had come across four of Niven’s tablets from the Valley of Mexico and was interviewed in a podcast.
The name of the podcast is ArchyFantasies and the particular show is titled, “Jeb Card and the Mu Stones Pt 1 Episode 24.”

One of the questions that always arises in interviews where I discuss my latest book, The Stone Tablets of Mu, is ‘where are the tablets now?’ The implication that some of the tablets had been found and would undergo rigorous scientific testing, as well as an evaluation of the meaning of the symbols, was one of the reasons that I wrote the book and continued to update the “William Niven’s Tablet Discoveries in the Valley of Mexico” website. I make the point in my book that it is quite possible that the tablets were never taken seriously due to the association with my great-grandfather, James Churchward. I had hoped that eventually we could learn their real meaning and decipher more of our ancient past.

Allow me to reiterate, from the information I have read, I do not believe that William Niven was a charlatan or was engaged in any hoax with James Churchward. From William Niven’s biography, “Buried Cities and Forgotten Gods,” the tablets were discovered prior to the publication of James’ first book or when they first started their correspondence.
As to the veracity of the finds, to quote ‘Buried Cities, Forgotten Gods [page 218],’ “(archaeologist Sylvanus) Morley was convinced it would have been impossible to “hoax” the Old Man.”

Dr. Card, in studying the four tablets in his care, described them as being made of pumice, a very low density, soft volcanic rock. He is analyzing them, but sets forth the assertion that he believes that they were/are a hoax.

As further information is made available, I will provide updates and even hope to interview Dr. Card to describe what he has found from his investigations to get to the truth of the matter.