Recently I received an email from Russia that announced that Aleksandr Aleksandrovich Voronin, President of the Russian Society on Studying of Problems of Atlantis(ROPIPA) passed away at the end of last year (2012.)

The following was sent by George Nefedyev:

Russian and international atlantological movement suffered a loss – The President of Russian Atlantis Research Society (ROIPA) A.A. Voronin deceased on 59 year of his life. He devoted his life to only one cause, one Dream – the search and proofs of the existence of Atlantis, legendary country, about which ancient Greek philosopher Plato told us.
A.A. Voronin was born in 1954 in Tula. He got juridicial education. From the beginning of 1990-s he cooperates actively with editorial staff of “Marvels and Adventures” magazine and “Moscow Mistery Club”, where he had many like-minded persons and colleagues. Since 1999 the almanac “Atlantis: Problems, Searches, Hypothesis” started to be published, the permanent editor-in-chief of which Alexander Alexandrovich became. In all three issues were published (the first issue in 1999 under the title “The Magic of Atlantis”, the last one in 2002). Exactly this almanac during the short period of it’s existence managed to become the consolidating organ, around which many famous scientists and specialists in various fields of science united due to the efforts of A.A.Voronin. The next and naturally determined step in forming Russian atlantological movement became the formation on 25th of April 2003 of Russian Atlantis Research Society, the president of which A.A.Voronin became. In other countries such organizations exist for a long time, but such a society was created in the history of home science for a first time, in many respects due to the energy and organizing talents of Alexander Alexandrovich Voronin.
The interim but meaningful result of his selfless activity and the movement lead by him became the carrying out on the 21-22 of May 2003 of The Second Russian Congress of atlantologists (the first one took place in 2000 and was most likely the conference) in the accommodation of Shirshov Oceanology Science Institute, devoted to 100 anniversary of the birthday of the outstanding Russian atlantologist and scientist Nickolay Feodosievich Zhirov. It was an unprecedented action, because for the first time the forum of such a scale and thematic direction was held inside the walls of the Institute. Later on at the same place on the 26-27 of November 2007 the Third Congress of atlantologists took place, which played an important role in strengthening and popularization of atlantological movement.
A.A.Voronin prepared for publication the series of books “The Library of Atlantis” (Veche, 2004-2005), and then the other series, in the limits of which the works of such outstanding atlantologists as N.F. Zhirov, L.Zeidler, Ch. Berlitz, O. Muck were published (or reprinted). The inestimable contribution of Alexander Alexandrovich in Golden library of the world atlantological thought became his books “The Naval Colonies of Atlantis” (M., Veche, 2004) and “The Treasures and Relics of the Lost Civilizations” (M., Veche, 2010).
In the first book the original and innovatory conception of “multitude of the colonies of Atlantis” is presented, as a complex of the constructions and artifacts belonging to antediluvian developed technogene civilization found around the world which exceeded the level of the development of the modern humanity. In the second book the author put in the circulation for the first time the unique materials gathered in the course of his researches of several years, devoted to the relics and artifacts of the lost civilizations.
He also wrote the first biography of one of the most famous of home atlantologists N.F.Zhirov: “Zhirov – the founder of atlantology. Through the torns to Atlantis”, (published: N.F. Zhirov. “Atlantis. The main problems of atlantology”(M., Veche, 2004), and also biographies of the other less known scientists and art workers, who took a great interest in the searches of the submerged land (G. Golochvastov, A. Beloborodov, E. Hagemeister etc.) All these articles and works were as preparation to planned by him “The History of home atlantology”, the book which he wanted to write most of all.
At the handing of the national prize “The Golden Pen of Russia” in 2010 Alexander Alexandrovich was presented with an order “The Labour Heroism of Russia”. It was the first case in home history when the work of the scientist-atlantologist was marked with such a reward.
In October 2011 in the limits of the project “To the Sources of Europe” A.A.Voronin took part in scientific research expedition on the sail ship “Running on waves”, during which he visited Rome, Athens, the islands of Sardinia, Malta, Nisiros and Cyprus. Since 2012 A.A.Voronin became the editor-in-chief of “The Almanac about the Misteries of Ancient Civilizations: Cronos”, the first issue of which must be published in the nearest time.
Death suddenly tore off his amazing and wonderful life, but it couldn’t and never will be able to break the matter which he devoted himself to.
Atlantis – a fairy-tale, a legend which becomes the truth before our eyes. And there is a priceless and not yet estimated contribution in it of Alexander Alexandrovich Voronin, the true romantic and purposeful scientist, the name of whom will stay forever on the tables of the history of world atlantology near the names of N.F.Zhirov, V.I. Shcherbakov and the others.
The blessed memory about him will live in our hearts forever.
G.V. Nefediev 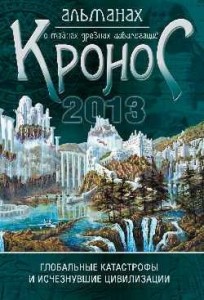 In the first edition of the magazine, “Cronos” published an article (in Russian) about James Churchward and his theories and was helpful in translating the inscription on a metal jar that was shown in one of James’ books.