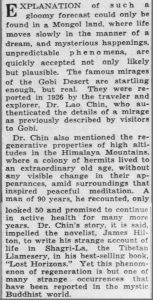 This entry was posted in Miscellaneous, References to James' work. Bookmark the permalink.

One response to “Searching For the Enigmatic Dr. Lao Chin”