The Conquest of Mexico by the Mongols

In previous blog postings I have made mention of the theories placing the Mongols as conquering the Americas and their population. James Churchward wrote that the original inhabitants of Central America and Mexico were a white race.

The end of this white race was; They were conquered by a people of darker skins called Maya who took and settled on the land. The Mayas were composed of several distinct tribes among them being various tribes of Mongols and Semitics.
Synopsis of the Earliest History of Central America and Yucatan

Of course, in James’ version, the conquerors let the white people leave in ships to instill civilization in Europe and beyond.

In the minds of many scholars in the 17th through 19th century (and some even today,) the structures built by the Maya were built by white people and the mounds dotting the American countryside were constructed by the ‘Moundbuilders.’ Then the bad ‘darker-skinned’ people drove them out. Such assertions are nonsense as the physical evidence has shown.

How did the Mongols get to the Americas to be conquering its people? Did they march across the Bering Land bridge and down the west coast of the United States? Did they get in ships and sail to the Americas?

According to a book published in 1827 by John Rankin:

In the sixth page of the Introduction to the “Researches on the Wars and Sports of the Mongols and Romans,” the writer hinted at having met with some indications of a connection between Asia and America, long before the discovery of the New World by Columbus. From that time he has kept this object in view; and such has been the success of his further enquiries, that he now ventures confidently to affirm that Peru, Mexico, and other countries in America, were conquered by the Mongols, accompanied with elephants, in the thirteenth century.
Historical researches on the conquest of Peru, Mexico, Bogota, Natchez and Talomeco in the thirteenth century by the Mongols – 1827 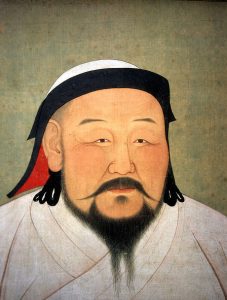 From what I have read, these Mongols were blown off course from the Mongol Invasions of Japan in 1274 and 1281 which ended in defeat for Kublai Khan’s forces. The first attempt only had 23,000 soldiers on some 700 (300 large, 400 smaller) vessels and many vessels were sunk in a typhoon. The second attempt sent over 4,000 ships and over 140,000 troops and history recorded another defeat.

Japanese history records the Mongols were soundly defeated at Taka Island, out of the 100,000 soldiers left without commanders (they escaped and went back home,) 20,000 to 30,000 prisoners were taken. The remains of a few of their ships have been found in Japan’s coastal waters, but not the massive number cited to have participated in the invasion.

A number of factors should be taken into consideration to decide if they really did make it to the Americas.
1. Would the vessels have had enough food and water for their army (and the elephants) to survive a Pacific Ocean crossing?
2. Have any mass concentrations of Mongol weaponry, cooking gear, or other Mongol artifacts been discovered in the Americas to indicate their large force was present?
3. Although the discovery of Mastodon and Mammoth bones might lead some to believe elephants might have lived in the Americas, the mammoths are generally believed to have died out some 10,000 years ago on the American continent and their remains are still being found today.

While I have identified one source for the ‘Mongol Invasion’ of the Americas, the idea still reaches past credulity to find/produce evidence of this so-called invasion.

One response to “The Conquest of Mexico by the Mongols”