The Cosmic Diagram of the Land of Mu Part 4

In parts one and two, we examined what James Churchward wrote about the Cosmogonic/Cosmic Diagrams in his books, then in part three, we looked at the same symbol and interpretation as postulated by Augustus Le Plongeon in his 1896, Queen Moo and the Egyptian Sphinx. In this part, we examine the second half of the footnote from Lifting the Veil on the Lost Continent of Mu Motherland of Men that references the ‘Cosmogonic Diagram of Mu.’ 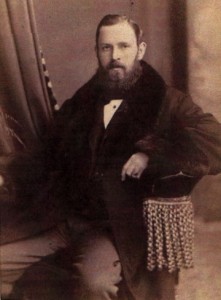 Albert Churchward was James’ younger brother, was an author of books on Freemasonry and an accomplished surgeon. In the 1910 Signs and Symbols of Primordial Man, being an explanation of the Evolution of Religious Doctrines from the Eschatology of the Ancient Egyptians, Albert also has the symbol sometimes called the Cosmic Diagram, as well as Cosmogonic Diagrams from Egypt and Assyria.

We would call your attention to these photos, one from Egypt, one from Assyria and one from Mexico, identically the same and identical with our P.Z. jewels. The full explanations of these signs must be apparent to all R.A.C.’s.

The division here in twelve parts, the twelve signs of the Zodiac, twelve tribes of Israel, twelve gates of heaven mentioned in Revelation, and twelve entrances or portals to be passed through in the Great Pyramid, before finally reaching the highest degree, and twelve Apostles in the Christian doctrines, and the twelve original and perfect points in Masonry.

The twelve divisions of the Tuat, the original, were the twelve signs of the Zodiac, worked out by the Astro-Egyptian mythologists during their Mythos; then they converted their mythology into Eschatology, which must have taken many years. We find they had, so to speak, “ dug out ” the Underworld, and had, by divine inspiration or the study of the laws of the celestial bodies, come to the conclusion that after the death of this perishable body, the soul, which is imperishable, had to travel through many dangers and difficulties before it could join or be received again by its Divine Creator. This the Egyptians depicted most graphically, and the records are still extant in the book of “That which is in the Underworld,” which they have divided into

twelve divisions : “The Tuat and the Twelve Hours of the Night,” which is hewn in stone in the Great Pyramid of Gizeh. In the Christian doctrine the twelve gates of heaven were taken from this. Here, in the Pyramid, the old Theopneustics taught the initiate step by step and degree after degree what the soul had to encounter and pass through before it could arrive and pass Amenta and receive the Crown of Glory in the presence of its 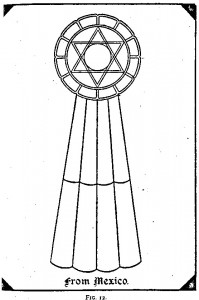 Divine Author, thus teaching him the life he must lead here on earth, and the sacrifices he must make—“ to do unto others as he would they should do unto him ” in his earthly corporate body that he might receive the Crown of Illumination in his spiritual. All these ceremonies were illustrated and carried out in a dramatic form, more especially to impress upon the initiate the seriousness of the subject; and “ each portion of the Tuat,” and “each hour of the night” constituted a so-called “degree” or gate or door to pass. That all this was worked out at an early period – pre-Dynastic – we have ample proof in the fact that we find Khepera is represented as a Hawk – the Spirit – issuing from 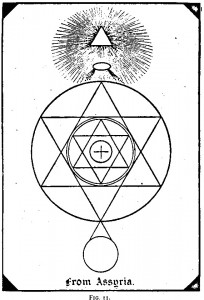 a mummy. This would denote that they had worked out a part at least of their Eschatology. In our opinion the Great Pyramid of Gizeh was built as soon as this was completed. We know that many Egyptologists do not agree that these earlier people had any ideas or beliefs at this remote period of “life and spirit hereafter” but we must insist upon the fact, that it must have been so, because here is the proof – “The spirit issuing from the mummy.” This alone is conclusive.

This entry was posted in References to James' work, Symbols. Bookmark the permalink.