Posted on April 24, 2013 | Comments Off on Book Review of Lifting the Veil on The Lost Continent of Mu by Dr Susan Martinez 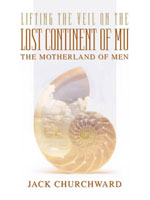 No one who calls himself a protohistorian can be unfamiliar with James Churchward. Few had or have his gift of interpreting the past. Ahead of his time in so many ways, he was the man to point us in the right direction (literally) for unriddling the secrets of gray antiquity.  Who were our civilized forefathers and where did they come from? This book, produced by his great-grandson Jack, is an 8 by 11 volume with a striking cover design in well-chosen palest hues. It contains the entire contents of James Churchward’s 1926 classic, The Lost Continent of Mu: Motherland of Man. Amplified by accumulated research since that time, in the form of Notes, the work is also wonderfully enlivened by curious items from James’ own scrapbooks. The excellent annotations by Jack bring us up to date and provide intriguing support of his great-grandfather’s controversial theories.

“Churchy” (to friends) was an appealing character, inveterate adventurer, believer in a Higher Power than man, outspoken critic of junk science, and author of extremely exciting and well-researched books – on a variety of subjects. The best known of them deal with the sunken continent of Mu in the Pacific Ocean. It is generally believed that his ideas were originally drawn from, or jump-started by, his translations of the immensely old Naacal tablets from India and from deep excavations in Mexico. Reading Churchward guarantees a wealth of archeological information; his writing is also based on historical documents, inscriptions at sites of historic ruins, native traditions, and geological evidence.

JC’s later works are a culmination of 50 years of probing and devotion to his passion: finding out! – getting the Past (even 50,000 years ago) to make some sense. In doing so, of course, the Churchward corpus of knowledge cannot avoid stepping on some toes. Politically-correct hadn’t been invented yet. An embarrassment to the Standard Model (of where and when civilization first appeared on earth), his ideas nonetheless make a lot more sense than the fairy tales (a phrase he used) we are spoon fed.

With the Egyptian Book of the Dead, Mayan Codices, the Lhasa Record among his sources, JC exhibited a mastery of epigraphy with his uncanny decipherment of glyphs and icons. Master of symbology, he decoded the Greek alphabet itself, presenting it as a narrative of the inundation of Mu, which disaster left “only water where a mighty civilization once existed.” Legends of the Great Flood are a big part of the story; tracked down also are countless traditions honoring the Muvian ancestor who gave the sacred mysteries to mankind. Churchward’s understanding of ancient religion, including rites never published, is unmatched even after eighty-plus years.

A scholar’s scholar – though no academic – he linked up traditions, beliefs and practices from every part of the world with a remarkable command of cross-cultural comparisons and convincing portrayal of common origins, ever following the survivors from the Motherland to their new countries of colonization. In the process, he unfolds also the true (or almost true) origin of the white race. JC is a good read, whether or not you agree with everything he says.

Sprinkled throughout are his amazing theories of: mountain raising, magnetic cataclysms, civilization in the Tertiary, buried cities; gas chambers inside the earth (which his great-grandson updates with recent confirmatory studies); where the first books (Mosaic) of the Bible came from – and much more.

Churchward uncovered and elucidated things that no other investigator has even thought of. He was completely original! Perhaps a touch dogmatic, but, hey, he was usually right (not always). Still, he’s one of my heroes and teachers. His greatest contribution? The first to comprehensively uncover the lost race of the deep dark past.

The Lost History of the Little People

Time of the Quickening