The Egyptian Book of the Dead and James Churchward (part 1)

Posted on September 26, 2021 | Comments Off on The Egyptian Book of the Dead and James Churchward (part 1) 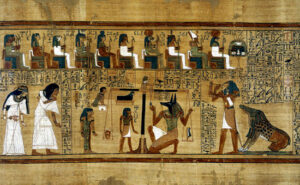 Papyrus of Ani – created c. 1250 BCE, during the Nineteenth Dynasty of the New Kingdom of ancient Egypt.

“In the preceding chapter I have referred to the Egyptian Book of the Dead. It contains many records that prove that the Motherland of Man, the submerged continent of Mu, was, indeed, the original habitat of the race of men, and that other countries were merely orbits for bodies that moved about a center of attraction, which was the highly civilized continent of Mu, colonizer of the worlds that lay beyond its immediate ken; consequently it does not appear to me to be out of place to say a few words about the Book of the Dead at this point.”

James then provides the different translations from different Egyptologist for the name of the document:
Dr. Pleyte         – Going Forth from the Day
Brugsch Bey         – Book of the Outgoing by Day
Lefebure, Maspero, Renouf   – Coming Forth by Day

Despite the “comings” and “goings” or “from” or “by,” all these really mean the same, just different word choice. However, James uses the disagreement of the Egyptologists to assert his interpretation. James changes the “m” to mean “Mu,” his sunken Pacific Ocean continent. His interpretation then becomes “Mu has gone forth from the day” and the Egyptian Book of the Dead becomes a “sacred commemorative memorial.”

“Mu has gone forth from the day.” This is in accord with what I have previously said: The Book of the Dead is a sacred commemorative memorial to the 64,000,000 people who lost their lives at the destruction of Mu.”
My many years of study in the Orient with some of the most capable of Oriental scholars have enabled me to read many of the esoteric meanings appearing in the Book of the Dead; for it must be remembered that there is a very close connection between the ancient learning of India and that of Egypt. Upper Egypt was colonized and settled by Mayas from India, and when their settlement Maioo was firmly established, a party of Naacals left India and went to Egypt, to establish the teachings of the “Seven Sacred Inspired Writings,” religion and the sciences; thus it is seen that the teachings I received in India, to an extent, applied also to Egypt.
At what date the Book of the Dead was first formed is unknown; apparently, however, the first copies contained only a few chapters, which were subsequently added to until it assumed the proportions in which we now find it. In this respect it has been a duplication of the Hindu book, Maha-bharatta, which commenced small and grew large with time.
Every chapter in the Book of the Dead either directly or indirectly refers to Mu, and the book is permeated with symbols which were assigned to Mu before the foot of man trod the soil of Egypt.
As already stated, Mu was first torn to pieces by earthquakes and then sank through the flames of the underneath into a fiery abyss or caldron.