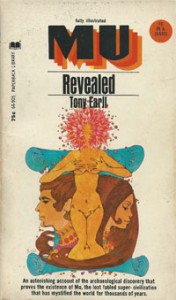 “Mu Revealed” is advertised as the 6th in a series on the cover and a list of ‘other books in the Mu series’ is provided inside.

The first part of the book published in 1970 describes the details of the Dr. Reesdon Hurdlop expedition to the Valley of Mexico to gather evidence to prove the existence of Mu. Sponsored by the Marquina-Jolicoeur Institute of London, Drs. Hurdlop, Maude N. Robat and Raymond Buckland as well as author Tony Earll are parties to an excavation of one of William Niven’s sites near Mexico City. This dig completes the investigation only partially excavated by Niven (according to the author.) After reaching the lowest level encountered by Niven and underneath a stone slab in that floor, a small stone sarcophagus was discovered. The box was opened and inside were 69 papyrus scrolls that were subsequently dated to 23,000 years ago.

Part Two of “Mu Revealed” uses the translated scrolls to provide a description of Mu from the viewpoint of Kland, a neophyte priest of the Temple College of Mu. The 69 scrolls are purported to be his diary, saved from the cataclysm of volcanic action by being hidden under the floor. There are differences between Churchward’s description of Mu and that provided in “Mu Revealed.” Churchward always spoke of the inhabitants as without savagery, but with the description of the handling of an uprising, “Mu Revealed” rejects that premise. The book describes the people in greater detail than James’ written works and even includes an image of one of the scrolls – one thing that James never did with the Naacal Tablets. Another term mentioned in the context of the ancient civilization of Mu was slavery – a term unused in the original works. A final notable difference is the established pantheons. In “Mu Revealed” we are told that there are two ‘gods’ represented by the Sun and Moon. On the other hand, James concept of the religion followed by the people of Mu involved the ‘Great Cosmic Force.’ James’ understanding of the Great Cosmic Force was a common variable that was expressed in the entirety of James’ works. His interpretation of signs and symbols were derived from this understanding.

Part Three (a very short section,) provides more information in an attempt to collaborate Churchward’s theory of Mu. He also goes through some reasons that some of his conclusions differ from the original.

The forgoing was a brief summary of the contents of ‘Mu Revealed.’ As mentioned previously, the cover has the words ‘6th in a series’ and inside are listed the names of the other volumes, of which James Churchward wrote five. One might assume that Tony Earll, Reesdon Hurdlop and the Marquina-Jolicoeur Institute that sponsored the expedition were somehow officially authorized to bring their findings into the ‘official’ canon of James Churchward’s works. That assumption would be false. Written 34 years after James’ death, the book is/was not part of the “Mu series.” Another facet of “Mu Revealed” is that the author’s name on the front of the book, ‘Tony Earll’ is an anagram for ‘not really’ and ‘Reesdon Hurdlop’ is an anagram for ‘Rudolf Rednose.’ These anagrams appear to be deliberate inclusions in the text. According to ‘The Internet,’ the real author is Raymond Buckland, but not everything you read on ‘The Internet’ is true. I did confirm via email that Mr. Buckland is indeed the author of  ‘Mu Revealed.’ My request for an interview went unanswered. The only conclusion one can reach is that it is a work of fiction and the contents are a complete fabrication. The author does provide some quotes from James Churchward and the release closely followed the paperback republication of his works. I can’t speak for Mr. Buckland, but it is clear to me that ‘Mu Revealed’ was his attempt to introduce his interpretation of James’ theories into the ongoing revival of Churchward’s books (and to sell a few books by association.)

‘Mu Revealed’ is a work of fiction and is not part of the ‘Lost Continent of Mu’ series. In my opinion, I would not include references to ‘Mu Revealed’ as evidence enhancing the veracity of my great-grandfather’s theories.

Since I am not privy to all the details, nor can I read minds, I offer an open invitation for Mr. Buckland to respond as he sees fit with an entry in the my-mu.com guest blog. I will append the link to that response when available.

Thanks for visiting,
Jack Churchward

This entry was posted in Miscellaneous, References to James' work. Bookmark the permalink.